Last Sunday the run was at CSU with 85 members tackling the various distances of the 1.6km per lap course.

Doing the one lap distance Hugh Daintith (8:00) just got the fastest time by five seconds from Sam Wilson and team Irwin (11:15) comprising Alex, Lachlan and Nick finishing in a tie for third. Of the girls, Arabella Harvey ((10:31) claimed the fastest time from Sidney Harvey (11:36) and Jade Prior (15:23).

Amber Rich (14:42) again powered to a first place finish over the 3.2km distance as she lead home Ella Lamrock (16:20) and Katrina Smith (16:58). Noah Lamrock (14:22) also picked up a first placed finish over that distance, with Mitchell Cooper and William Homer (both 15:38) not too far behind in equal second spot.

Ursula Wilson (38:22) showed no ill effects from her 27km run on Saturday by powering through the 8km in the fastest time to beat off the overall winner Brigette Cole (48:50) and Renai McArdle (52:11). In the mens event Daryl Roweth (38:22) did enough to keep Mark Chapman and Ian Fisher (both 40:50) at bay as they secured second spot.

On Wednesday at Elephant Park another 85 starters, but many different faces to Sunday, took to the track, but one guy in particular scorched around in a 20 second personal best time of (10:43), to set the fastest time of the night. Not far behind with the third fastest time was Adam Reeves who ran a time of (11:35), which secured him the overall win. Fastest female was Ursula Wilson with a (12:56) for the three laps. Other Personal Bests were set by Naomi Boynton 4s, Maddi Hook 4s, Arthur Locke 1m1s and Harry Cummins 29s. Also we did recognise that our President, Jane Fairgrieve, was doing her one thousandth club run.

We are collecting old running shoes for Planet Earth. All you have to do is wash any old pair of running shoes you no longer need, tie them together and bring them to Runners Club and put them in the collection bin. In due course David Gibson will take them to the collection point in Canberra. Sounds like a great idea and a way to help people less fortunate than ourselves.

Tonight our club Christmas Party and presentation is on at the Nashdale Hall on 28 November.  It should be a great afternoon / night as Santa is coming with lollies for the kids, there will be a jumping castle for the little folk and the catering is being undertaken by the talented Sue Betts. All gets underway from 3pm.  There will be numerous raffles and the first prize will be a voucher for $200, second prize is $150, third prize is $100 and 4th prize is $50, plus numerous smaller prizes.  You have to be there to win a prize.  We will also be announcing the major winners for the various running categories.

Also don’t forget you can now enter in your chosen event at the Colour City Running Festival, so take advantage of the early bird prices and get your entry in.

This weekend the club run is at Elephant Park with a one hour challenge. Even though the challenge is to see how many laps you can complete in the hour, please remember you can stop at any time (especially for those who may have enjoyed themselves a little too much at the Christmas Party. 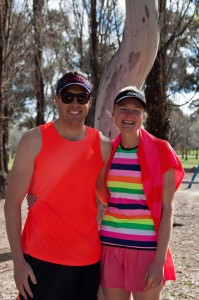