At the Christmas Party and awards night on Saturday, the new ‘ROY’ or ‘Lea-ROY’ as she is now known, Leanne Corcoran, was announced as the ‘2014 Runner Of the Year’ after a stellar season of running. Included among her many great achievements, a first ever marathon at the Gold Coast, where she posted an outstanding time of 3 hours & 25 minutes.  Winning the Junior Runner Of the Year as well as the Most Consistent Junior title was Jack Daintith after another busy and successful year on the running tracks.  Also a very special award saw an extremely excited and proud Keagan Wilson receive the ‘Encouragement Award’.

The list of other awards on the night and those runners nominated for the major awards, were as follows:

The day after the Christmas Party, many of the party goers turned out for the one hour challenge at Elephant Park. To make the job of running around the track a little easier and less monotonous, organisers set the run to be done on the longer 1.6km (1 mile) loop which goes down near the pool. Around 90 runners accepted the challenge and set off at their various paces with many looking to maintain that pace for the hour and see how many laps they could do. The fastest runners scorched around 8 laps inside the hour although potentially fastest man Brad Simmons could have slipped in another one inside the hour but decided he was done.

This weekends Sunday run is at Clergate School, starting at 9am, with a return to the specified distances (3km, 5km or 10km).

Looking a little bit ahead the Wednesday run on December 24 is cancelled but there will be a run on the Sunday December 28.

Also, there is a book now available at Runners Club for people to put your names down to help out over the festival weekend. Please get your names down ASAP to help with the event organisation. 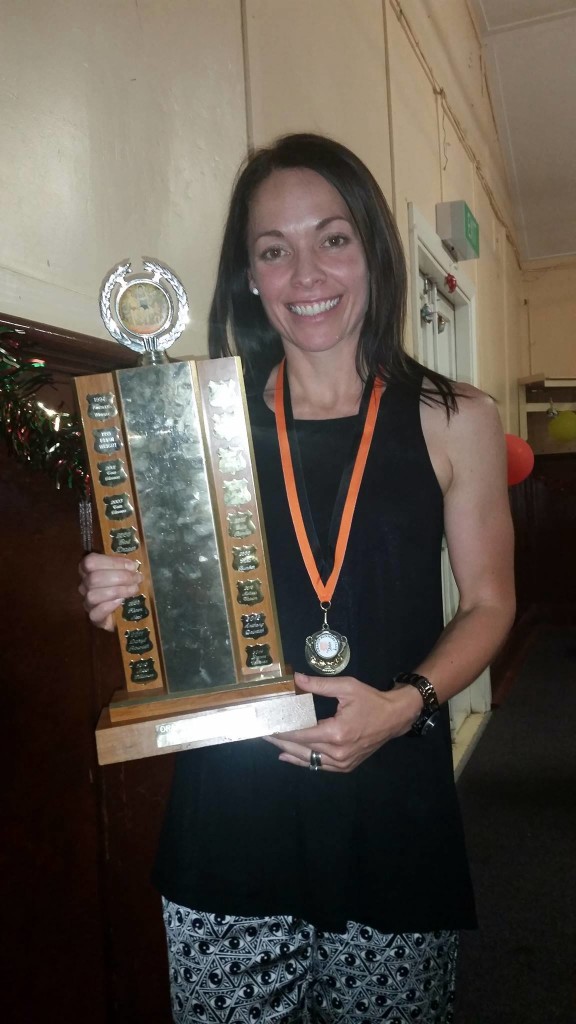 TOP BILLING: Runner Of the Year Leanne Corcoran shows off her trophy.