CWD 13 Feb 2016 : Sutherland continues to set the pace with another win

Last Sunday the club run was held at the picturesque Pinnacle course with the easy gentle rolling hills with over 90 starters enjoying a beautiful morning for running. Rebecca Halls and young Oscar Halls pumped out an impressive 0.6km, while Josephine Kitto trumped that with a 1km of her own.

Ella Lamrock (15:15) led the charge up and down the hill for the 3km distance, with Molly Dean (16:05) and Isabel Francis (17:38) coming in second and third spot respectively. Abigail Francis (17:44) was just behind her sister and secured the overall win for the day. Fastest of the boys was Sam Wilson (15:28) who finished ahead of Tony Fitzpatrick (16:22) and Kyle Ostini (17:05), with some people doing a little further than the 3km’s.

On Wednesday at Elephant Park the warm conditions tested many runners, with Nathan Sutherland (10:49) again setting the fastest time. Liz Simpson (11:29) was the quickest of the ladies after running a very consistent three laps. Michelle Lang (16:46) ran a very impressive 29 second Personal Best to clinch the overall win on the day, while PB’s were also ran by Molly Cameron (6s), Melissa Fogarty (45s) and Bridget Cole (16s).

Time is running out to enter the Orange Colour City Running Festival, so don’t be a Daryl and get your entry in now for one of the races / fun run distances. There is a distance for everyone, from the kids 2km run on Saturday afternoon to the 5km and right up to the testing 42.2km Marathon on Sunday morning. Also we need teams to get organised and get their entries in to win one of the school or business Challenge categories

This weekend the Sunday run is at Elephant Park as well, with a free BBQ to follow. 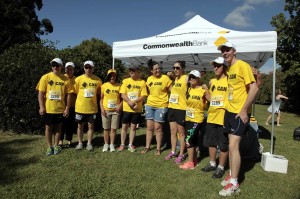 TEAM FUN : The Orange Colour City Running Festival has a fund team’s event, and the Commonwealth Bank team of runners who completed the event last year loved it, clearly.