Last Sunday the club run was held at Elephant Park, with the longer Endeavour Oval loop giving runners the choice of one to three laps of the 2.6km course. One hundred and ten runners enjoyed a beautiful, slightly warm morning run.

Brad Simmons (10:20) is starting to get back into his running and was the first and fastest to finish the one lap distance. Coming in second was William Homer (10:50), while John Moss (13:11) picked up a hard earned third place. Isabel Francis (13:04) was the fastest girl in a tight finish with Tanya Connolly (13:29) and Eva Keegan (13:38). Over the 5.2km distance, Nathan Sutherland (19:41) continued his impressive form with a comfortable victory over a large field of runners. Recently new member, Julio Cesar Adolfo (22:17) continued his improved showing to capture second spot ahead of Noah Lamrock (22:54). Xanthe Keegan (24:04) was the fastest of the girls, finishing just in front of Ella Lamrock (25:09) and Bonnie Keegan (25:49). Iain McLean (30:20) led the way over the three lap, 7.8km distance, with Mitch Essex (32:11) his closest chaser and the hard working Paul Centofanti (35:11), coming home in third spot. The speedy Meg Reeves (31:53) was not far behind Iain, as she set a cracking pace for the girls, while Amber Rich (35:32) got in in second place ahead of the consistent Ursula Wilson (36:01). Naomi Scrimshaw (17:57) completed the one lap and was awarded the overall win on the day. Many of the runners then enjoyed a free BBQ and cold drink to top off the morning. A big thank you to the committee for organising this, but also thanks to our cooks and their assistants, including Sharon Fahy, Glenys  Rosser, Jane Fairgrieve and anybody else who I may have missed.

Wednesday at Elephant Park was another nice afternoon weather wise for running and 92 recorded starters crossed the timing mats. There were some great times set, but a very impressive group of the faster runners pounded through their first lap together kicking up a dust storm. Leader of that pack was Nathan Sutherland (10:06) who set the fastest time of the day, which also was also a 7 second Personal Best. Also amongst that group was Julio Cesar Adolfo (11:27) who pushed out a 42 second PB to pick up the overall win for the day. The fastest female was Karyn Vardanega (13:50) who ran a very even 3 laps. Other runners to secure the much cherished PB were: Naomi Scrimshaw 11s, Mark Harvey 3s, Pip Farquharson 9s, Sally Kitto 18s, Ricky Bangert 19s, Leah Morphett 34s and Sim Hawke 44s.

Only 1 week to go until the Orange Colour City Running Festival. Entries close at midnight on Friday night February 26, so get your entry in now for one of the races / fun run distances. There is a distance for everyone, from the kids 2km run on Saturday afternoon, right up to the testing 42.2km Marathon on Sunday morning.

This weekend the Sunday run is at Botanic Gardens. 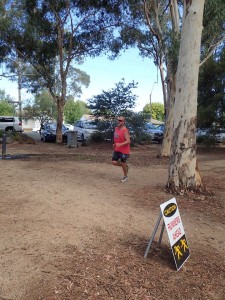