This weekend all the focus will be on the Colour City Running Festival. It should be a great weekend for running so if you have not entered by now, unfortunately it is too late, but you can come out to the back of the hospital and cheer on the runners or even ask some of the organisers if there is anything you can do to help.

Some great results from some of our Runners Club members at the NSW Masters Championships at Homebush in Sydney on the weekend with (age group):

On Wednesday at Elephant Park 77 runners started on what was another very warm afternoon, but before things got started, Ethan McArdle (100 runs) and Russell Tym and Michelle Whiteley (both 400 runs) were presented with certificates to recognise their milestones.

Nathan Sutherland (10:28) again had the top spot to himself, while Alicia Ross (12:59) had another strong run to be the fastest of the girls. Anthony Wilson (12:53) has also continued his impressive string of performances to capture the overall win. Personal Bests were run by Pip Farquharson 4s, Leah Morphett 48s, Julio Cesar Adolfo 53s and Joanne Lim 30s.

Good luck to all those involved in the organising of the Running Festival as well as those competing in the various events. 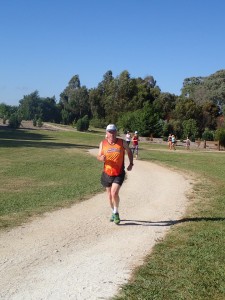