This weekend saw a lot of action with the first trial of the Orange Park Run, Brett Sammut with his outstanding commitment and effort in doing the Great Ocean Road 100km race, the Hounslow Classic in the Blue Mountains where Adam Reeves 3h1m55s and Alison Broughton 4h34m15s as well as the Sunday club run at Jack Brabham.

On Saturday Brett Sammut raced the ultra trail race known as the GOW100, in Victoria. Starting from the coastal village of Apollo Bay, the race negotiating a path that followed the Great Ocean Road cliff tops, beaches and trails. The course had an overall elevation of 3,600 metres, meaning that not much of it was flat. The race finished at the famous 12 Apostles, with a 1am cut-off on Sunday. Brett managed to sneak in with 14 minutes to spare, giving him a time of 18 hours and 16 minutes to run the 102km course.

In the Sunday Club run at Jack Brabham Sidney Harvey ran the 1.75km run in a time of 15:13 to be declared the overall winner. With 84 runners starting these were the top 3 places in the distances contested.

On Wednesday at Elephant Park 64 runners went over the timing mats with Fiona Montgomerie running 18:57 for her three laps to be awarded the overall win. Fastest on the day was Brad Simmons, who ran a quick 11:22, while Ursula Wilson ran 12:14 to finish as the fastest female.  There was one runner who set a Personal Best as relatively new member, Oliver Hopkins, ran a great time of 12:50 to record a 47s PB.

Registrations are now open for the 2017 Orange Running Festival. The event will be held on the weekend of February 25 – 26 and there is an event for everyone, with the Pete’s Car Wash 2km, Hotel Canobolas 5km, Westfund 10km, Athletes Foot Half Marathon and the JP Hotel Brokers Marathon.

Sunday’s club run is at Bulgas Road starting at 9am.

Also, today the final trial of Orange Park Run 5km at Gosling Creek. Check out the website or facebook for more details.

It is time for runners to nominate a runner for the ‘Runner Of The Year’ and ‘Junior Runner Of The Year’ to be awarded at our annual presentation / Christmas Party in December. These awards recognise Club members who have demonstrated consistencty, achievement and improvement over the last 12 months (Nov 1 2015 to Oct 31 2016). Nominations close November 4 and forms can be found on our website. 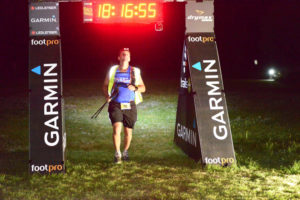 Photo of Brett Sammut at the finish of his epic 100km Great Ocean Road run.