Slightly better weather conditions than the previous weekend and 51 starters headed out to Gosling Creek on Sunday morning. Some very competitive running in all three distances saw great times posted, with Craig Penrose declared the overall winner after finishing a close third over the 2.3km course. The top three placegetters over each distance were:

On Wednesday at Elephant Park there was a short presentation for the placegetters in last weeks’ first night of the Junior Spring Carnival. After that was completed, the running started with 78 starters enjoying a cold but sunny afternoon. The fastest runners on the day Ethan Buesnel (9:55) for the guys and Brooke Martin (11:59) for the girls, both ran personal best times of one second and seven seconds respectively. Oliver Hopkins also ran an impressive 35 second personal best on his way to a great time of 13:02 in his third club run. Overall winner on the day was Sophie Martin who ran a consistent 12:56 for the three laps.

Registrations are now open for the 2017 Orange Running Festival. The event will be held on the weekend of February 25 – 26 and there is an event for everyone, with the Pete’s Car Wash 2km, Hotel Canobolas 5km, Westfund 10km, Athletes Foot Half Marathon and the JP Hotel Brokers Marathon.

Sunday’s club run is at Sir Jack Brabham Park starting at 9am.

Also, today and next Saturday, for those keen runners, the organisers of the soon to start Orange Park Run, are running a trial run of the Park Run 5km at Gosling Creek. Check out the website or Facebook for more details. 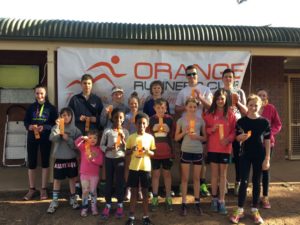