On Sunday 67 club members took on the challenge of a new track at Favell Road. The run started and finished at Byng Church. As well as the picturesque rural scenery the run featured a few little hills and a couple of herds of sheep, with President Renai McArdle proving to be the clubs’ number one shepherd or sheep whisperer. Thanks also to Brian Penrose for controlling the parking.

To the results and in the 3km run Lachlan Ross (14:40) was the quickest, with fellow young guns Logan Whiteley (15:59) and Hugh Corcoran (16:18) battling for the minor placings. Abigail Francis (16:09) was clearly the fastest of the girls, which also secured her the overall win on handicaps. Coming in next behind Abigail, was mum Lauralie (19:31) and Michelle Whiteley (19:34). Some serious pace at the front of the 5km distance saw Iain McLean (22:52) finishing slightly quicker than the charging Jared Sullivan (23:37) with Mark Chapman (26:24). Of the girls, Leanne Corcoran (26:02) was the first home ahead of the very consistent Lily Craig (31:15) and Dani Syme (32:25) coming home in third spot.

Unfortunately Wednesday saw another wet night which kept numbers down with 26 starters and a mass start. Jack Daintith (11:24) set the fastest time of the night. Amber Rich (12:38) was the fastest of the girls while Richard Eggleston (15:39) secured the overall handicap win, running consistent laps. A big thank you again to Michael Sharp who was there again to do the timing.

The Junior Spring Racing Carnival commences Wednesday 28 Sept including a BBQ after – refer to the website for full details.

Also a date for your Calendar, is the 3rd of December, for the Christmas Party / Annual Presentation.

Sunday’s club run is at the Botanic Gardens, while some runners will be competing in the Blackmores Sydney Running Festival on the weekend and many runners will be travelling down the road to the Bathurst Edgell jog. Good luck to all those competing. 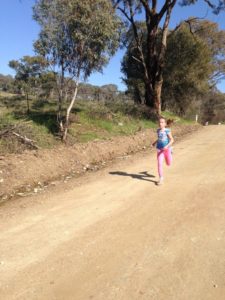 Sunday’s handicap winner Abigail Francis, as she flew down the hill at the new Favell Road run, finishing first female home in the 3km run.