On another wet Sunday where 28 runners club members took to the Botanic Gardens club run other runners travelled to the Bathurst Edgell Jog and Blackmores Sydney Running Festival. The standout performers were the marathoners, with Iain McLean (2:59:06) outstanding as he dipped under the magical 3 hours. Not too far behind that was the running man, Mitch Essex (3:16:51), while James Harvey (3:53:17) and David Gibson (4:02:37) also completed this challenging distance. In the half marathon Dani Syme (2:18:26) got the fastest of our two girls running in the race, while Michelle Lang (2:39:55) finished strongly. Susie Patey (1:06:30) completed the famous 9.23km Bridge Run.

Another wet Wednesday night saw 40 starters hit the track with Lauren Kerwick (10:54) setting the fastest time while Tim Robinson (11:05) was the fastest of the guys as he set a 14s Personal Best time. Noah Lamrock was the overall winner as he clocked 11:56 for the three laps.

The Junior Spring Racing Carnival commences Wednesday 28 Sept including a BBQ after – refer to the website for full details. 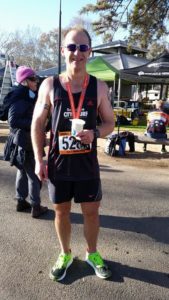