On an icy cold Sunday morning out at Bulgas Road, 87 hardy club members showed their commitment to having a run and headed down the hill after a few words from President Renai McArdle. Powering down the road and back up again as the fastest in the 3km distance were: Jack Daintith (12:47), Noah Lamrock (13:00) and Lachlan Ross (14:19) for the boys and in the girls Brooke Martin (13:26), Sophie Martin (13:44) and Ella Lamrock (16:08). Brooke was also declared the overall winner for the day on the back of that effort.

In the 5km run Brad Simmons (20:51) was the quickest ahead of Tim Robinson (22:23) and the team of Frank Ostini (24:15) and Aidan Whiteley (24:16). Amber Rich (21:47) led the race for the girls ahead of Lily Craig (26:30) and Chelsea Gregor (26:48). In the 10km distance it was all about the Martins, with Stephen Martin (43:11) leading the field home while Janet Martin (50:13) was top of the girls field. Coming home behind Stephen over this tough run were David Ross (44:41) and Paul Centofanti (45:59) picking up second and third place respectively. Of the girls and keeping things family orientated, Alicia Ross (50:41) came in second and Alison Dermody (52:56) third. At Elephant Park on Wednesday night 89 starters took on the three lap challenge with Jared Sullivan (10:19) proving the fastest overall just ahead of Stephen Martin (10:27), while Ella Lamrock (12:34) set the quickest time of the girls in a tight contest one second in front of Ursula Wilson and three seconds ahead of Lily Craig. Among a host of Personal Bests, Pip Farquharson (13:23) ran a 19s PB to pick up the overall win on the night. Other Personal Bests were ran by: Tanya Connolly 4s, Daryl Roweth 3s, Andrew McArdle 14s, Ben Kiho 5s, Hugh Daintith 2s, Sophie Gordon 46s, Greg Shapter 22s, Aiden Price 29s, Michelle Pearson 50s and Steve Johansson 45s.

Best of luck to all runners running at the Glow worm festival on the weekend as there appears to be a sizeable contingent of members tackling this event, while unfortunately for the runners who were going to Forbes for their running festival, it has been postponed until October 9, due to the expected wet weather.

This Sunday the club run is at Lake Canobolas starting at 9am.

Also a reminder that the following Sunday June 26, the club run will be held at Elephant Park and will include a free BBQ after the run. 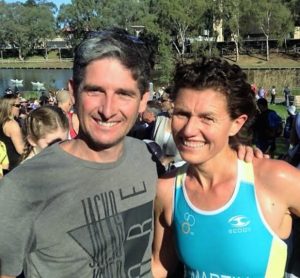 Stephen and Janet Martin were the fastest male and female over the 10km distance on Sunday morning at Bulgas Road. Stephen backed that up with the second fastest time at Elephant Park on Wednesday night.