A big weekend with the Glow worm trail running festival at Newnes near Lithgow attracting a large contingent of runners club members. In the Saturday half marathon Iain McLean was our first and fastest finisher while Kinisha Roweth won her age category. While in the 6km Bolt Lachlan Ross was our fastest and first finisher and also won his age category. Brett Sammut completed a double half marathon by doing both the Saturday and Sunday events and unfortunately a couple of runners had to pull out during the event due to injury. The club results were: (my apology to anyone I missed)

In the running Rhianna Fitzpatrick (14:38) was the fastest over the 3km one lap distance. The not identical running twins, Caitlyn Broadfoot (16:32) and Lily Craig finished with surprisingly the same time, to fill the place positions. For the guys Hugh Daintith (14:54) was the quickest by just two seconds from Tony Fitzpatrick and Stewart Vidler (15:15) not too far behind in third. In the two lap race Nathan Sutherland (22:41) was a standout as he lead home Anthony Wilson (27:43) and Nicholas Thomas (28:00) who secured the minor placings. Jane Fairgrieve 36:15)was the winner of the ladies run, while Renai McArdle (37:42) secured second spot ahead of Amanda Gregor (39:16). Jared Sullivan (35:25) secured first place in the three lap run, with new member Matt Paton (39:44) coming in with an impressive time and in a bunched finish Tim Edmonstone and Damian Harbrow (both 40:39) finishing equal third 2 seconds in front of Mike Cooper. Ursula Wilson (38:27) was a comfortable winner in the ladies over the three laps, beating home Jess Quinn (51:37) and the ever reliable Kim Jarvis (53:19). John Betts was the overall winner backing up from his Saturday half marathon and doing the 3km run in 16:59.

On Wednesday night the course was reduced to a shorter loop due to the condition of the track and increased to five laps. Of the 50 recorded finishers the fastest recorded five laps were recorded by Connor Whiteley (11:19) and Meg Reeves (11:51), while Aidan Whiteley (14:02) was declared the overall winner as he continues his return to club running.

This Sunday the club run is at Elephant Park starting at 9am, but unfortunately the BBQ has been cancelled due to the weather and track conditions. 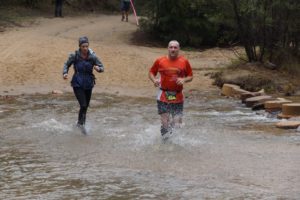 Alicia Ross and Jamie Corcoran crossing the creek in the Glow worm Half Marathon.