On a cold weekend 78 members took up the challenge around the Elephant Park track with a number of solid times set. The Lamrock’s dominated the one lap, 1.6km distance with Ella (7:28) and Noah (6:58) setting the fastest times for the girls and boys respectively. Filling the places behind Ella were Rebecca Halls (10:12) and Angela Broadfoot (14:31). Lachlan Ross (7:29) came in second fastest of the guys, while David Craig (8:00) was not far away in third.

The overall winner on the day was Gareth Thomas (38:33), who ran his usual solid 8km.

Also on the weekend Iain McLean travelled to the Blue Mountains to tackle the Woodford to Glenbrook trail run where he finished seventh overall and second in his age group in a super time of 1:42:05 for the 25km race.

Fastest three laps of the night were recorded by Ethan Buesnel (10:11) overall and Charlotte Simmons (10:57) for the ladies.

The club is looking for volunteers to put in some time into the timing system to allow Michael Sharp and John Hannan the time to occasionally run without the distraction of running the timing.

This weekends club run is at the CSU campus starting at 9am.

Also this weekend will see a number of our members travel to the sunshine state for the Gold Coast Marathon and running festival. Good luck to all and looking forward to hearing about their results. 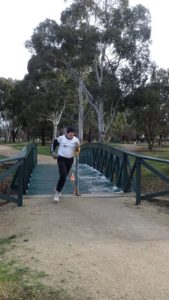