On a beautiful May Sunday morning at Clergate, 86 runners enjoyed the out of town run. A guest appearance from 2016 Great Volcanic Challenge winner Reuben Caley (39:30) saw him run through the majority of the field and eventually pass the speedy Brad Simmons (40:41) to secure the fastest run in the 10km run. Iain McLean (41:24) continued his impressive running filling the third spot on the modified two laps of the 5km course.

Ursula Wilson (44:52) ran a strong two laps as well, to lead home the ladies while Alicia Ross (50:09) continued her impressive running to keep the fast running Tina Kiho (50:17) back in third spot.

Also on Sunday, Meg Reeves ran in the Australian Mountain Championships in Mt Tennent ACT, where she finished third overall female in a time of 52:36 for the 8km course. As well, I heard that magic Mike Cooper (1:37:32) got in another half marathon, at the Sydney Morning Herald Half Marathon as he continues to push out consistently strong performances.

On Saturday in the Blue Mountains the testing North Face 100 was held with Nick Thomas competing in the 100km race but having to stop due to illness sometime after the 65km checkpoint where his time was just over 13 hours. In the 50km race Tim Scrimshaw ran a fantastic 7 hours 23 minutes, while Alison Broughton and Brett Sammut (10:29) completed the race together.  Adam Reeves (2:34) ran the 22km course in a scintillating time while Naomi Scrimshaw (5:16) did a great job on this difficult course. In the short race up 951 steps / 1.2km, Meg Reeves (10m14s) came in second female and seventh overall while Lachlan Ross (13:18) came second in the under 14 category. Dave Ross (10:52) also completed this testing sprint up the steps.

On Wednesday at Elephant Park 80 members turned up on a cold afternoon to run their laps. Connor Whiteley (9:00) again had an impressive run with a 26 second personal best as he ran the fastest time of the night. Fastest female was Jessie Dean (11:44) who powered around the track, while Jessie Tudor (14:02) ran a 15s personal best to secure the overall win. Other runners to secure the cherished personal best times were: Corey McArdle 25s, Andrew McArdle 5s, Hugh Corcoran 56s and Harrison Knox 1m18s.

This Sunday the club run is at Bargwanna Road starting at 9am, while also there is the North Parkes Rotary Fun Run on Sunday with a 2km race for the kids as well as 5 and 10km races. 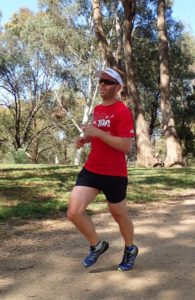