On Sunday morning a small contingent of Orange Runners Club members traveled to Parkes to tackle the North Parkes Rotary fun run. David Ross (42:35) was the fastest of our 10km competitors finishing just three seconds behind the third place runner as he finished fourth overall and first in the Masters age category. Ursula Wilson (43:58) was only a few places behind David, finishing as the second overall Female.

Lachlan Ross (49:46) continued his successful run and was the first junior finished, while mum Alicia (48:56) was hot on the heels of the front runners to be the fourth female finisher. Others to complete the 10km race were Brett Sammut (47:57) and Brian Sharp (51:58).

Keegan Wilson (22:46) did the 2km race and finished strongly to win his medal.

At the Sunday Club run at Bargwanna Road 87 starters hit the road to tackle this testing track. Brad Simmons (42:51) was the fastest of a strong field in the 10km run, as he finished ahead of Iain McLean (43:24) and Connor Whiteley (44:39). Leading lady was Leanne Corcoran (48:04) ahead of the impressive running of Alison Dermody (52:29) and Renai McArdle (64:36) coming home in third spot. Reuben Caley (18:39) showed scintillating pace over the 5km course to lead home Jack Daintith (22:28) and Jackson Boucher (22:44). For the girls, Lily Craig and Caitlyn Broadfoot (28:23) finished with the exact same time, while Kerrie Lindsay (28:31) was only just behind them. Ricky Bangert (12:54) was the standout in the 3km run but not to be outdone brother Elliot Bangert (14:09), came in in second place but was awarded the overall win on the day. David Craig (16:09) continues his battle against injury, but still managed to come home third. Grace Srzich (15:30) was best of the girls, while Tanya Connolly (16:52) was second ahead of Kim Broadfoot (17:56).

Also last weekend John West tackled the Athletics NSW 10km race walking Championships at Chipping Norton, where he won the M65 plus category in a time of 1h12m18s.

A quick reminder that next Wednesday is the start of the Winter program and the Elephant Park runs will start at 4:45pm for the next 3 months.

This Sunday the club run is at Stagecoach Road starting at 9am. 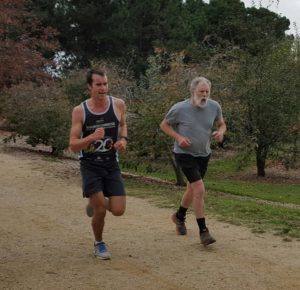