Last Sunday the club held its relay day at Elephant Park where two person teams were drawn from a hat. Runners and walkers ran alternate laps until each runner had completed three laps.

Overall winners on handicap were Oliver McLean and Mike Cooper who recorded a time of 63:02 including handicaps. Coming in second were Craig Penrose and Hugh Daintith (65:11) and Lily Craig and Erin Gibson coming in third (66:07).

The fastest teams on the day were:

Also on the weekend, Alicia Ross, Meg Reeves and Adam Reeves competed in 4 Peaks Bright Mountain Challenge which is ran over four mountain peaks including Mt Bufalo and Mt Hotham. A total climb of some 6000 metres.

On Wednesday afternoon at Elephant Park 59 starters crossed the mats with Nick Thomas having a great afternoon being recognised for his 100th club run, whilst also running the fastest time of 11:20 which was also a 25s personal best. Kim Roweth 400 runs and Kinisha Roweth 300 runs also were awarded certificates. The fastest female  was Ella Lamrock with a time of 12:52 while Mylena Duchene(37s) ran a personal best as did Oliver McLean, with his 5m58s personal best securing him the overall win in a time of 18:40.

This week the club run is at CSU, while many runners will compete in the Carcoar Cup running festival. 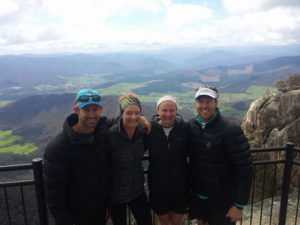