On Sunday at Kinross Forrest 52 starters tackled the three available distances. In the 2km race Sophie Martin (10:24) was the fastest overall, with Eva Keegan (10:55) second and Freya Keegan (11:30) third. For the guys, Beau Keegan (11:05) continued the successful morning for the family being first home in the 2km ahead of Bailey Penrose (11:35) and Ethan McArdle (16:50) in third spot.

In the testing 9.1km distance the boys led the way with Iain McLean (38:23) continuing his impressive form to be the standout performer as he beat home the strong running Brad Simmons (41:05) and Felix Koeppen (42:45). Running machine Kim Jarvis (56:44) topped the ladies field finishing in front of President, Renai McArdle (60:43) and Beckie Plant (66:15). Overall winner of the day was Nathan ‘King’ Garton, (26:32) who was behind the main place getters in the 4.8km run.

Also on Sunday a number of runners travelled down the road to Bathurst to compete in the Bathurst RSL Half Marathon and 10km races. Liz Simpson (39:48) was the fastest of our starters in the 10km run coming in second female. Nicole Williamson (42:46) came in just behind Liz, to finish third. Other standout performances were Lachlan Ross (48:29) with a huge personal best and fourth in his age category, Kate Thornton (53:44) finishing first in her age category. Others to complete the 10km run were Marc Kiho (46:03), Carrie Williamson (49:02 and second in age), Katrina Smith (53:33), Michelle Lang (60:47), Susie Patey (64:30) and Justin Stent (89:54).

Earlier in the year it was proposed that we recognise the high achievers within the club with the development of a point score championship.  The concept was trialled until the AGM and approved to continue for the 2016 calendar year at the committee meeting held on the 4.4.2016.
The Championship scoring will run from February 2016 to the mid October 2016 and there will be trophies for winners in each age group (male and female) at the annual presentation night.
Points are awarded per run and tallied into a cumulative total with reports published monthly.  Your point score is a combination of both Sunday and Wednesday events. 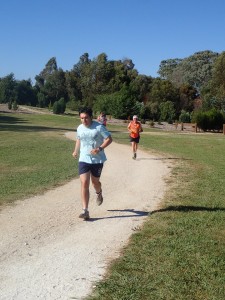