On Sunday at Gosling Creek the club decided to change the track to a pure Gosling Creek area run and despite a couple of missed turns the general consensus amongst the large group in attendance, appeared to be, that it was a good change. Kinisha Roweth must have liked the track for the 2.5km run (although only a minor change to the old course), as she finished fastest, with a time of 10:43 also securing her the overall win on the day. Grace Srzich was a few minutes back picking up second spot ahead of Joy Harvey who finished third. Craig Penrose (14:22) led the charge of the guys with Gary Taylor and Gary Penrose picking up the placings in a tightly contested race. Another tightly contested race was the highly popular 5km. With almost 30 male starters and over 50 altogether, there was a steady stream of runners on the track and crossing the finish line. Kyle Ostini (22:32) was the quickest of those, closely followed by Jackson Boucher and Jim Rich. Of the ladies, Leanne Corcoran (23:39) added this on to the 20 odd kms she had already run, as she finished just in front of Rhianna Fitzpatrick and young gun Jessie Dean. Also of note was an eye catching run from new member Danni Burgio who finished just seconds behind the top three in fourth spot. Ethan McArdle made up his own distance with a 7.8km run taking him just over the hour to complete. Doing the new 10km, 2 lap course proved tough for most, but Brad Simmons (41:24) and Iain McLean (41:58), both showed consistent pace while the course maestro Mike Cooper worked his way to third spot. Estelle Dean (46:40) was third overall and first lady home ahead of Sue Dean and Renai McArdle.

On Wednesday night 90 runners tackled the course at Elephant Park with the final few runners to finish, getting soaked when the heavens opened up with rain and some hail on the remaining members. Mark Chapman and Luka Mihalich were tied on the fastest time of the day with a time of 11:58, while Ella Lamrock with a 13:44 was the fastest girl. Chris Cameron engineered himself to the overall win with a solid 12:31 but may have been overshadowed by daughter Molly who finished with a big Personal Best time. PB’s were recorded by Brian Penrose 6s, Sabrina Manickam 3s, and Molly Cameron 44s. Other runs of note were from new member Mathew Vickery who ran a 3:30 third lap (fastest lap of the night) and Isabel Garces who ducked under the 20 minute mark for the first time (19:58), which may have been a PB that slipped passed the timing guru.

Some recent milestones were recognized on Wednesday as well with Wayne Stewart (500 runs), Helen Roberts (400 runs) and Wayne Fahey (100 runs).

At the recent Dubbo Athletic Carnival, John West won the M60 – 64 Walk in 10:34 as well as finishing first in the Javelin and Discus events and second in the Shot Put.

This Sunday the club run is at the CSU campus with the 1.6km lap type course supplying a distance for all as you can do anything from 1 to 5 laps. 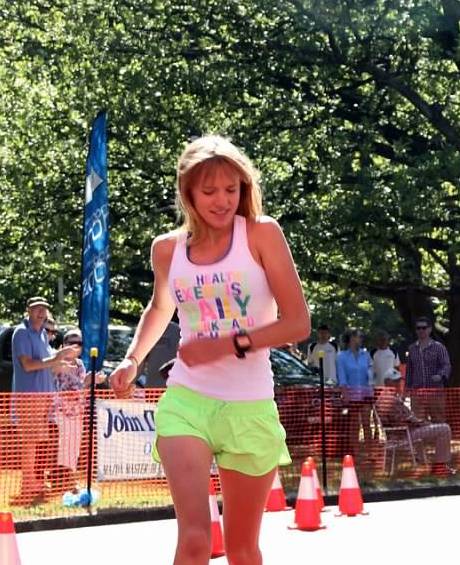